With concerns about voter fraud and cyber warfare at an all time high, election officials and government leaders are seeking ways to restore confidence in the election process. As well as being vulnerable to security attacks, aging voting machines are subject to software and hardware malfunction.

Political candidates have recently touted blockchain as the key to protecting elections from voter fraud and cyber warfare. The reality is, though blockchain databases solve the issue of voter database hacking numerous security risks remain.

With blockchain, voter databases can be spread across a network of servers and systems making it difficult for cyber criminals to tamper with voter records at scale. However in order to support anonymous voting, voters must be issued a “cryptographic” security key for identity verification. Critics have argued these security keys would effectively become security targets for cyber attackers. In Moscow, a blockchain-based voting system was used to facilitate local elections, and the encryption scheme was assessed by a French researcher who concluded:

“It can be broken in about 20 minutes using a standard personal computer, and using only free software that is publicly available. More precisely, it is possible to compute the private keys from the public keys. Once these are known, any encrypted data can be decrypted as quickly as they are created.”

Connecting the Digital with the Physical

For maximized security, post-election paper audits are also needed for quality control. Without a paper trail, ballot programming is at risk of cyber attack, and what’s more tampered votes cannot be detected by human auditors or voters. The electronic voting systems of today are both outdated and untested, leaving many states including New Jersey and Georgia vulnerable to undetected attack.

Our greatest defense against cyber warfare is having a decentralized voting system and a paper record trail for auditing. America’s decentralized, state-based voting infrastructure protects elections from being compromised on a national scale, but this does not account for the risk of voting machines facing cyber attack. Blockchain-based mobile voting systems would heighten the potential risk for damage from foreign manipulation.

Internet-connected devices and hardware are simply not suitable for sensitive elections conducted using electronic voting systems. Vistacom’s audience response system for e-voting and elections is deployed on private server networks for this very reason. Using a private localized network eliminates the risk of elections being infiltrated by cyber attackers. Only someone with access to location sites could attempt at tampering with elections. 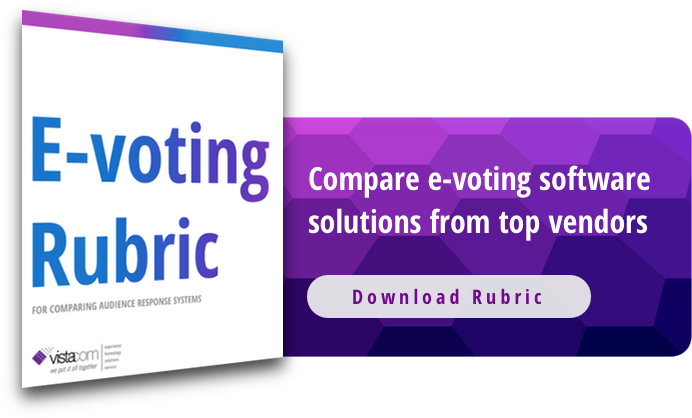 Up Next: UMC Conference Planner On Adopting Electronic Voting Keypads